The Joys Of Painting For Others

As we approach the Winter Solstice, playing in the back of my mind is a string of memories from previous years from times when it’s been my honour and my privelege to paint models for my friends. The Hobby Kingdom in Burlington Ontario, holds both Winter and Summer paint exchanges, for a start. Several years ago I was the recipient of a wonderfully heinous gift from my friends who insisted that I needed green and purple Cygnar. I was later able to return the favor, collaborating with a number of folk to foist a Harbinger theme force off on Northblade, painted in the colour scheme of his beloved Cygnar. I was one of the coordinators of one of the largest Press Ganger paint exchanges, receiving for myself nothing less than Garryth, painted by Nathan “Drifter” Pullen. Is good times.

Recently, I had motivation to paint for a friend again…

I’m a fan of alternate paint schemes, and I’ve long thought the Sorscha Kratikoff greyscale art from Forces of Warmachine: Khador was, frankly, stunning, so when Lostie MortymerXT picked up Forward Komannder Sorscha I saw an opportunity… 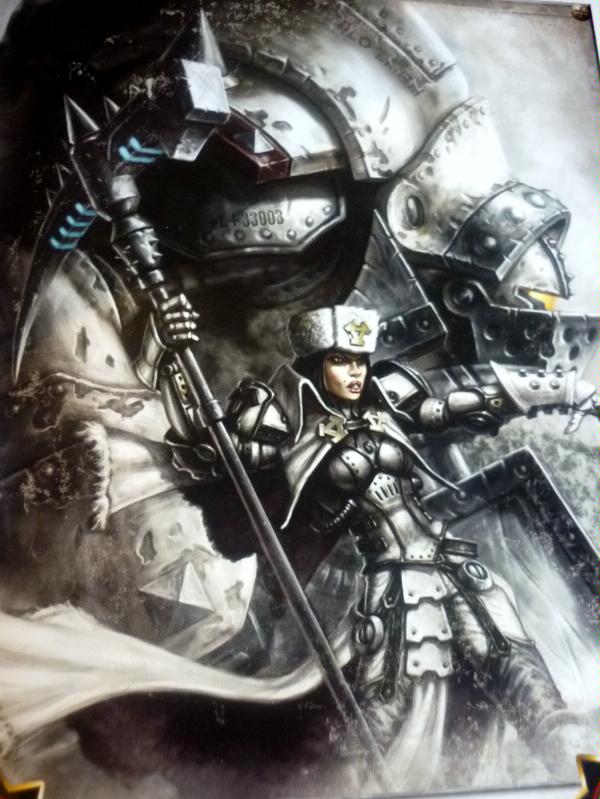 Granted, my scheme has a lot more of a blue tint to it, but I’m still very happy with how it came out, and more importantly, I’m pleased to be able to present this to MortymerXT and know that he now has to figure out how to match the scheme for the rest of her theme force 😉

Also recently, I was able to participate in a Chibi paint exchange on Facebook. A quick trip to the Hobby Kingdom yielded Chibi Definitely-Not-Elvira, who, went mounted on the right Dragon Forge Design resin base, looks like she’s walking on aquarium gravel.

You have no idea how much that aquariuam gravel amuses me… She’s now in a box waiting to be mailed to the lucky recipient.

Now, you may be pondering what the point of today’s post was, other than to show off a couple of models that, frankly, I’m pretty pleased with.

It’s to remind you that sometimes, picking up your brushes and painting a model for someone else can be the most awesome thing. You’re not just gifting them a model, you’re gifting them your time, your talent, your skill. You’re handing over something and saying “I have made this effort for you”. In a highly commercial Western world I think many of us, as we’ve grown up, have forgotten the meaning, the value of gifts that are more than just the materials they’re made from. I will never get the hours I spent painting that Sorscha back, and I’m very happy with that. My gift to MortymerXT is part of my days.

It’s not all about the recipient, though. It’s for you too. I have a small Khador army, but I’ve no intention of playing Sorscha2; by painting the model for MortymerXT I got to experience the pleasure of painting a model I may have never otherwise purchased, of trying out a colour scheme that’s been in the back of my head for (literally) years. I tried out a couple of new things while doing the base for the chibi, and tried out a few other tricks – did you realise I primed the model with Army Painter’s red primer, thinking it’d be a predominantly red model? More fool me 😉

Painting isn’t everyone’s bag, okay, there’s enough different aspects of our hobby that there’s plenty for everyone to enjoy… find something you enjoy, and think about what you can do to enrich the gaming lives of those around you. Also, mail me candy. I like candy.

📂This entry was posted in Painting

« The Book Of Starry Wisdom Devastation »