You wanna know what’s exciting? A new release for a favored game. You wanna know what’s more exciting? When it’s for a game that’s seen big resurgence over the last year or so, thanks to the ability to play it online. You wanna know what’s dreadful? Every damn domain in Van Richten’s Guide to Ravenloft, which has just released. I mean, that’s the entire point of the book – a swath of brand new Dread Domains to drag players through, inflicting upon them any number of horrors and terrors. Sure, sure, Barovia’s one of them, home to Count Strahd Von Zarovich and his ancestral home in Castle Ravenloft, but there’s much more and it’s wonderfully dreadful.

The Illithids have turned Bluetspur into a nightmarish, otherworldy landscape housing the horrors and remnants of a thousand psychic torments, tentacles and all. Borca plays host to the deadly political maneuvrings of its noble houses, silver tongues hiding cruel intentions. The dark, twisted circus known only as The Carnival welcomes you to a world of wondrous sights and twisted visions. Falkovnia is a realm overrun by the walking dead, those few souls remaining struggling to eke out an existence with dwindling resources and the constant threat of flesh-hungry undead. Take a trip do the Muhar oasis in Har’Akir – can you survive the desert, where the sun is your foe, water is absent and the dark lord Ankhtepot’s agents seek a missing portion of his soul?

Van Richten’s Guide to Ravenloft provides expanded information on 17 Domains, abbreviated notes on 22 more, new character creation options (including the Bard College of Spirits – who’s up for a ghost story?) and more. Having spent the last year running a campaign in Ravenloft, I’m very exited to read through the book, its expanded bestiary, dramatis personae, and perhaps most of all, the House of Lament. 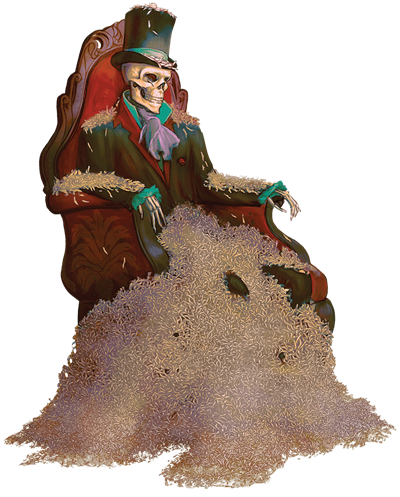 Introducing new players to D&D via the Death House adventure in the Curse of Strahd book was a lot of fun, but now we have a whole new haunted house adventure in to welcome a party of newbies into the mists and the horrors that await them.

Van Richten’s Guide to Ravenloft has dropped and is available through your FLGS or preferred online retailer.

📂This entry was posted in D&D 📎and tagged Ravenloft